History of Auckland Build
Auckland Build is part of Oliver Kinross’s Build Series, also taking place in Sydney,
London, Scotland and New York. First launched in 2016, the expo is dedicated entirely to
building and construction opportunities in Auckland and its surrounding regions. Across
the span of two days, the event brings together thousands of construction professionals,
architects, developers and government representatives. In addition to boasting over 200
exhibitors, Auckland Build – like its counterparts overseas – prides itself on being
content-driven. 70 top level speakers from across the industry take part in informative
presentations and CPD accredited workshops, covering topics such as BIM & Digital
Construction, Off-Site Construction and Sustainability. Auckland Build’s innovative
approach is founded on three main pillars: content, networking and entertainment. This has
earned the expo the prestigious title of Best Trade Show Launch at the AEO Excellence
Awards, which took place at Grosvenor House, London on 16th June 2017.
Partners Involved

industry, such as Registered Master Builders, Global GreenTag and BCI New Zealand.
Notably, Registered Master Builders will be running Apprentice of the Year 2017 – in
association with CARTERS – alongside Auckland Build at the ASB Showgrounds. The
expo is also proudly supported by speakers from the government, including Mayor of
Auckland Phil Goff and John Mauro from Auckland Council.

The main objective of the expo?
Auckland Build capitalises on the strong economy and high-levels of inward migration
which currently make Auckland one of the best performing construction industries in the
world. The main objective of the expo is to provide the best opportunity for professionals
to get together to discuss past, present and future projects. The event enables the industry
to educate itself and provides the perfect marketing tool for companies looking to stand out
within the competitive construction industry.
What do you hope the guests will take away from the experience?
As Auckland Build is led by education and training, we hope that guests will find
opportunities to approach the booming Auckland construction industry from new angles.
More importantly, we hope that our attendees can build lasting relationships within the
industry because we passionately believe in the growth potential of Auckland . 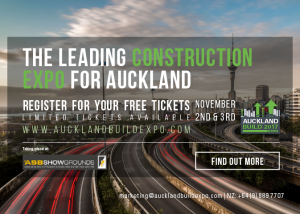